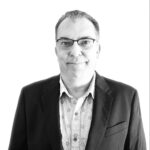 Dr. Frederic Buono received his BS in chemical engineering from Ecole Centrale de Marseille (France) in 1997 and PhD in organic chemistry from the University of Marseille in 2000. He spent three years as a postdoctoral fellow with Prof. D. Blackmond at the University of Hull (UK), where he conducted research in area of physical organic chemistry and mechanistic understanding of asymmetric autocatalysis reactions. Before joining Boehringer Ingelheim Pharmaceuticals, he worked for Bristol Myers Squibb in the Technology group in Late-Stage Development.

Frederic Buono joined Boehringer Ingelheim in 2012 as a Principal Scientist, responsible for establishing and directing the Continuous Flow Group in the US Chemical Development Department and for Early-Phase development projects. Since 2019, Frederic is leading the Catalysis group and most recently the new Digitalization group. As his main philosophy, he focuses on scaling-up projects from gram to kilogram scale using in-situ monitoring techniques, kinetic studies, modeling tools; and to quickly apply new, cutting-edge technologies to project needs and deliveries in a timely manner.